The past few weeks have seen multiple protests against lockdown measures across the US together with governors defying experts to start re-opening their economies. This could be politics-as-usual, or it could be the expression of underlying economic shifts affecting the balance of political power in the US. 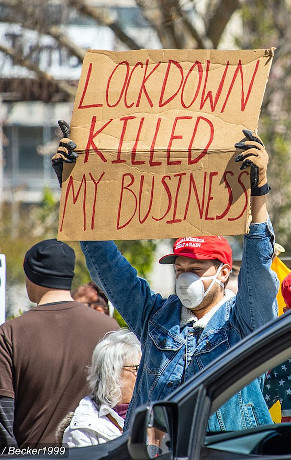 Some state governors in the United States, and other figures of authority throughout the world, are keen to re-open their economies by easing pandemic lock-down measures. Ostensibly, this is because they’ve come to the conclusion that harm caused by social distancing (along with the related job losses, missed health-care appointments, et cetera) is worse than the disease itself. But with the risk of “double peaks” due to insufficient social distancing or premature ends to lock-down measures, not everyone is convinced. 1 And some are even going as far as to accuse leaders of incompetence or negligence in public safety.

It’s worth trying to understand these positions, and in the absence of being able to have a frank discussion with the decision-makers, we’ll try to analyze their decisions with a model of human behavior. This model comes from the combination of two ideas: one about beliefs and social structures responding to economic conditions and the other about how political change happens. “All models are wrong, but some models are useful” – let’s hope that this model leads us to some useful and not harmful insight, but beware the dangers!

The first idea, from Marx, is that humans organize their society, social classes, religions, and belief-structures around their economic modes of production. Each particular economic system and method of producing commodities has, vis-à-vis, one particular social system associated to it. 2 From this perspective, Protestant Christianity dominated Western Europe because it was the system of beliefs that best matched the capitalist modes of production. 3 It is not that a person would adopt Protestantism because he or she consciously thought that it would help them excel in the workplace (that’s silly! Though, Marx does state that his father did just that.) Rather, the basic tenants of Protestantism – individualism, personal relationships with a higher authority, et cetera, reflected what they directly saw going around them. People aren’t entirely rational in choosing their beliefs, but they are not wholly irrational, either, and their casual observations of the world around them, and who succeeds and who doesn’t, would be the mechanism by which economic modes of productions select a particular belief. In other words, “persons with this set of beliefs have an easier time fitting into a society that uses this mode of production”. This is a neat explanation because it also suggests that you’d see religious beliefs with a more direct emphasis on capital success, like the Prosperity Gospel. Such post-hoc predictions are dangerous, however. Remember that all models are wrong.

Today, especially in the US, we see a variety of beliefs about Covid-19, ranging from it being a hoax, to a conspiracy, to a plot or foreign weapon to undermine Donald Trump in the next election. It is beyond doubt that many of these ideas are just phantoms of people’s fears. 4 But for our model, we will adopt Marx’s assertion that the economic modes of production have a direct causal effect on people’s beliefs and social structures. That is the first ingredient in our model.

Admittedly, this idea is quite vague in specifying which belief or social structure corresponds to a particular mode of production, nevertheless let us press on with the second idea. We need a workable theory about how those aforementioned decision-makers respond to economic conditions and the same social structures. The universally unquestioned truth 5 in most western academic circles is that history is a series of repeated battles between social classes, that it is one long continuous class struggle. Political revolutions never come from the working class, however. They are too busy working! Paying for food, housing, and generally surviving does not leave much time to be concerned about political agitations. Rather, political conflict comes from the middle class desiring the power and influence held by the ruling class. 6 The different aspects of American politics come from different factions of the ruling class fighting among each other, with the factions of the middle class divided between them, or united and able to exert enough influence to prevail against some factions of the ruling class. Political shifts only happen when the middle class becomes so fed up with the ruling class that they do unify. 7 The working class remains busy trying to make a living.

All models are wrong, including (and especially!) this one, but let’s sum it up: We have two main ideas, that 1) the aggregate beliefs of the population are a direct reflection of their economic system and 2) it is the angst of the middle class that is capable of causing massive political shifts. We still need some theory about how the economics of the pandemic will play out to do anything useful with these ideas. So let us now turn there.

Economics and the Pandemic

The economic toll of Covid-19 lock-downs thus far as has largely fallen on the working class. (Indeed, so has a good portion of the direct health toll!) The layoffs and rises in unemployment we have seen have hit retail workers, hospitality workers, gig-economy workers (which are largely a subset of the former two), et cetera. Other aspects of the working class have been bearing the brunt of supporting the livelihood of the ruling and middle classes – they were deemed “essential workers”, delivery drivers, non-doctor health-care workers, and the like. Only recently have we seen the professional classes at large tech companies start to suffer. 8 As the former group starts to default on their debts and mortgages, the professional class will start to report steeper and steeper losses. Banks holding on to mortgages, credit card debt, and car loans will take heavy losses that weigh down on their balance sheets. Advertising companies (the tech companies that are actually profitable) will see losses in revenue as the advertising revenues from the working class businesses dry up. Managers, financiers, and other professionals will start to see their positions threatened. Eventually, there will be a second round of redundancies – one that hits the middle class. As amenities that they used to enjoy, like access to health-care and college education, fall further out of reach, the middle class will start to feel the same crunch as the working class.

Indeed, we have already seen the middle class raise such concerns after they were affected by the Great Recession. Many factions of that class have been calling for universal health-care, free college education (this, more than anything else, is a middle class benefit. The working class, as we discussed, is too busy trying to survive to bother with four years in a university and not earning money), sick pay, and more. As this second round of layoffs causes more to lose their jobs and health insurance, larger potions of the middle class would start to clamor for these things. Their fixed beliefs in whatever ideas of “socialism” or “capitalism” that they previously held would quickly be altered by the new economic realities around them once they see that they are no longer benefiting from it. As our second idea suggests, a unified middle class would cause a political earthquake as they cast the metaphorical tie-breaking vote. While the initial round of layoffs may not have caused such a shift, certain parts of the ruling class (including Senators and state Governors) would be right to fear that a longer lock-down would become a direct threat to their power.

As the first idea states, people’s beliefs are influenced by their economic systems. Those same senators and governors that gained influence in the old economic reality would be committed to maintaining the rightness of the same policies that got them there. Naturally, those politicians would continue to hold beliefs that support the superiority of their system – this is not a conscious decision on their part but reflects that such a system has worked well for them and continues to work for them, and therefore it must be good. Things that suggest it might not work are obviously wrong. If, e.g., state-sponsored sick pay encouraged laziness and was bad for society before then one would be suspicious of a black-swan event that screamed otherwise. It is almost a corollary of another famous quote: “It is difficult to get a man to understand something when his salary depends on his not understanding it.”

It is probably wrong to conclude that anyone protesting against the lock-down is doing so because they are subconsciously worshiping Mammon. In fact, I am quite sympathetic to arguments for a swifter end. The economic damage is not abstract nor is it all about money. The mental health toll and physical health toll (from people who are delaying medical treatment) are substantial, and I am personally aware of people who have lost their lives because of it. But I still think that this model is useful because it suggests that the pandemic exposes ways that could shift the balance of economic and political power. It also highlights how people’s beliefs are affected by that shift. Put that way, one could also think that there were already large changes in our economic modes of production and that our social system has not yet caught up. The pandemic could be accelerating that shift. I do not mean this in the “legislatures suddenly have large complex bills to pull out just as the pandemic starts” 9 sort of way. I mean that we have already been seeing such changes in drips and drabs, and pandemic will unleash the rest of it like a flood.